I was what is commonly known as a Scaley brat at West Raynham in the 80s. My dad, Peter Heys, was an engineering officer working on the Bloodhound. Although still with us his memory is not what it was but I did take him to see the Bloodhound restoration going on at Cosford last year.
I remember lots of things about Raynham. A few years being in the cadets and spending almost every weekend out with the band at various places from carnivals to fetes and a couple of occasions at Norwich Football matches. We also had one of the AEF squadrons on site over a summer holiday which meant I spent a lot of time strapping cadets into Bulldog aircraft. We did however used to get the last flight of the day. We also used to set up miles of crowd barriers for Motorbike racing. Cadet exercises frequently involved dragging the CO's caravan out and manning the radios, or running round in the woods opposite the officers married quarters.
I also completed my weeks work experience in the Station Armoury, I had a mad idea at the time of joining up in the trade. Things progressed and I ended up joining as ground electronics and spending 22 years fixing airfield radar equipment.
It is really nice to see the site pictures, The officers mess, guardroom and church along with the old control tower which was the cadet HQ brings back so many good memories. Some of the names are lost in the fog of time but I remember Clare Carter and Mr Carter, Mike Lancefield and the Odell family, along with Ian Crane.
To all who knew me then hello, to those that were there and contributed in anyway thank you. I hope one day to join you at a reunion there, maybe even drag a few band instruments out and try and get a tune out of them.  Simon Heys

It was the summer of 87 and I was de-mob happy.  Myself and a young LAC acting Cpl on duty in the police flight. It was Friday night, often a wild night as people migrated from the SAS club to the Kestrel Club. Tonight was different tonight was Summer ball Night! I was asked to meet the Orderly Officer, a young Pilot Officer at the MGR to discuss a contingency plan if things went tits up. The O/O decided that at the 1st sign of trouble he would observe from the parade square as we went in to sort it out. Thanks for that!! Sure enough at 2030 the call came out. " Fight at the Kestrel Club". I pulled up on the Square with my young pale looking partner in our trustee red Chevette. The O/O was nowhere to be seen and my partner sweating profusely suggested he stayed with the car to guard it!! I approached the club and could hear the chaos going on inside but the lads I thought would be involved ( no offence 66sqn) were all outside sipping their pints in the evening sun. I always got on well with the rocks and as I walked up to them one said " you don't want to go in there Mal" Thinking we may have been infiltrated by civvies I said " and you're not in there" "No chance" came the reply" it's the wives!!" A few of the fairer sex were seen over the next couple of days supporting black eyes etc but no real harm done!   Mal Brown


I was at West Raynham from 1963 to 1965 as a Cpl. on 54 Squadron Hunters and well remember the first Kestrel arriving. We were told to go outside in the gathering dusk and watch this aircraft come in, nobody said anything about it being a Kestrel so no one knew what to expect, when it appeared doing a high speed run down the runway I thought "Was that it?" and turned to go home, I was late for tea already, but I was told it hadn't landed yet and to stay put,so I did. A few minutes later it appeared over the threshold at what looked like walking speed and proceeded slowly down the length of the runway till just before the end, stopped and hovered for a few seconds then went backwards, yes backwards, back down the runway. We couldn't believe it having never seen anything like that before. When it reached the middle of the runway it stopped, hovered a few seconds then pirouetted through 90° , moved forward then landed vertically on the pan in front of what was to become the Kestrel squadron hangar. We talked about it for days afterwards.  Peter Oram 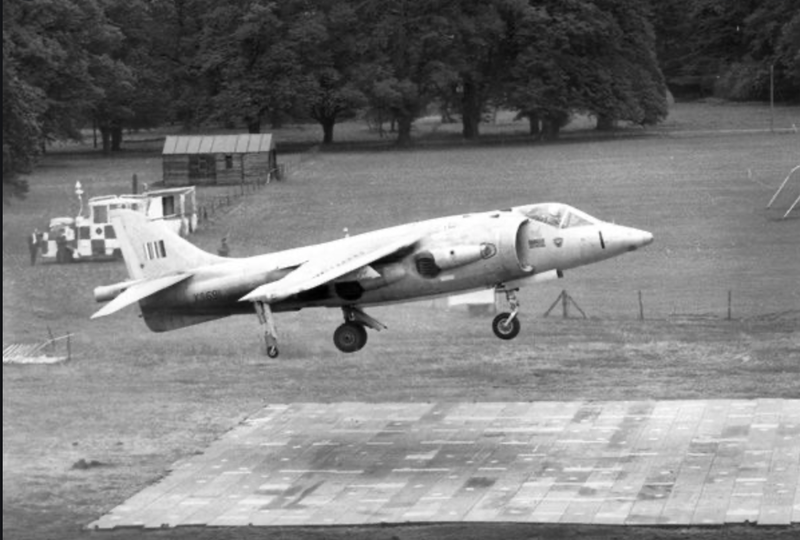 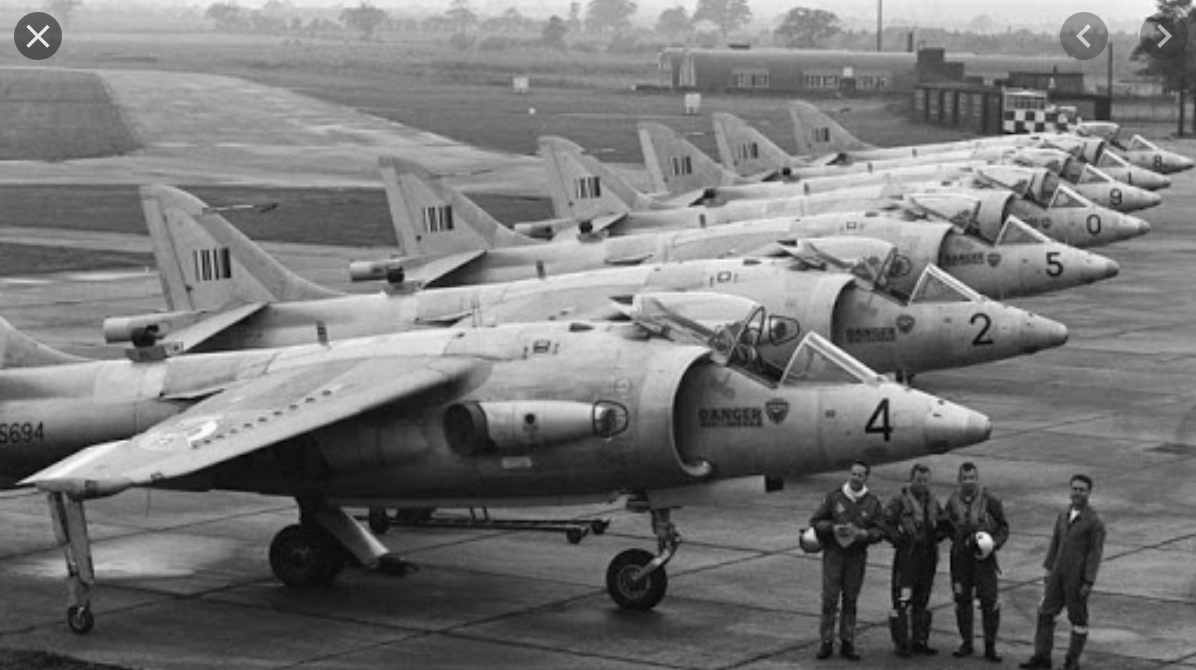 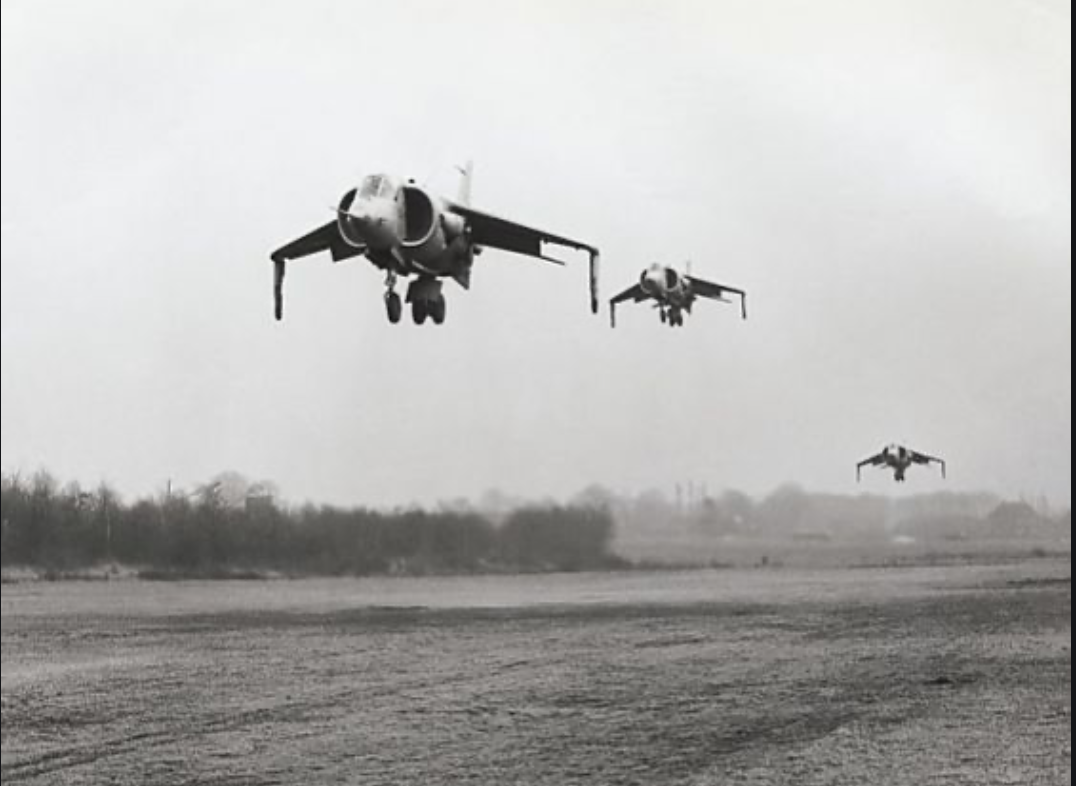